When I’ve  started doing sports , a lot of things were not so clear to me, but I didn’t care so much and I didn’t see what is beyond some of the actions.  Somehow it all went  in automatic. Everything was new for me and I’ve kept my mouth shut  and did what I was told to do. Some things were easy , and some things less .

My first coach always told us (the players) to celebrate each  point by gathering in the middle . Somehow he was insisting on it . After a time-out we were obliged to put our hands on the pile and to yell “ Opaaaa „. I didn’t understand why should i do that funny ritual.

Once upon a time , as a child age 10, I was practicing volleyball and basketball simuntaneously and both coaches was asking  the same from us, when we were celebrating points we made. „Embrace ur teammates in the middle of the court!“… It should last for N seconds after each point. N should be longer then 3 seconds.
It seemed strange to me and I didn’t understand what is the point of doing it .

Let me add that in these sensitive years, when we were all shy and kind of „having fear“ of touching and embracing other boys , that kind of celebrating was „unapropriate“ for us.
Maturing into an adult has deleted the  shame, and touching or hugging remained an anchor for a good incentive , good feeling for forever .
Later, we were taught that we should support teammates who are “ in trouble „, by touching them and telling them some positive affirmative motivational word.

From touching the shoulder , arm , head , back, all the way  to  the lower back , butt more accurately . In men’s volleyball often you can see how players patting each other’s butt , which is criticized by part of the male populationand women too . For example my famous grandmother Clara, which I was mentioning in all my interviews,  couldn’t understand it, and my mother was terribly annoyed with that other’s butt touching during game…
All the athletes, even the biggest macho guys actually prefer the touch and hugs . It’s great  and it is socially acceptable to have a hug with a team-mate in the middle of the game, in front of TV cameras and the audience.

In victory or in defeat .

What is it all about and why it is very important to use the touch in sport?Why is it important to communicate through touch ?

When we were born , the first sense we used, was touch. In that moment we don’t hear well, we see only gray and dull, but we feel the touch very well. We are looking for a touch of the mother, and we feel secure and protected. Maybe you could  recall, for a moment, that image when you were a kid and your mother is  hugging you. Or maybe your father or someone close to you. You can feel a hug and  sense that feeling inside your body, while you are hugged. How does it feel? Hug gives a sense of security and confidence , isn’t it ?

As we grew up  the other senses start to work and develop themselves.When we reach adult stage, we have five senses ( touch, smell , taste, sight and hear ) . Some scientists claim that we have even more of them( for balance, temperature, motion , etc. ). We use all our senses , but the sense of touch is the oldest and has the strongest influence on us .

You may notice that in every team sport , after scored goals , scored baskets or points, teammates are hugging, touching , tapping on the hands , head , shoulders … It’s not inarticulate outburst  of adrenalina. It is much more.

My wife loves to watch the winner’s joy after a match, no matter in which sport . I didn’t understand  what she finds in it, but  now I do understand perfectly. It is a very powerful source of positivism and  good energy .

Anchoring
In individual sports it seems a little different , but in fact-it’s the same. Anchoring is a way for a player to recall  the best version of himself and unconsciously it is related to  the motion of  arms, legs or other parts of a body. It is related to facial expressions and  it can be entire „choreography“, the set of movements (for ex., Nadal has his famous  choreography before he makes service ). Pay attention next time when you watch Nadal serving, if you haven’t noticed it already … Mr. Nadal is always doing the same exact set of movements before he makes serve.
Everyone has his (or hers) own choreography, which one has learned by himself or with assistance of coach or trainer . Consciously or unconsciously . It is much better to be aware of it  and use it when you really need.
Some people listen to music before the race or match. Maybe you’ve noticed  swimmers before the race.For example, Michael Phelps is always  with headphones in his ears,  before the race . I’m sure it ‘s always the same tune that he is listening to.

There are even words that athletes use to say to themselves, to be selfmotivated and to enter in the „state of excellence“ . Very often you can see athletes that are hitting, tapping or pinching themselves before or during the game.

Subconsciously, they want to feel the touch that will bring them security and confidence. They use the touch to „return“  to a moment when they were very good in performance, and when they had that „state of excellence“ that boosts their chances  to succeed. It is called anchoring.
Anchoring can be used  not only in sports, but also in everyday life.

Hug as grandgrandfather of anchor
Some wise men said that  the human being  needs  hugs on everyday basis in order to feel good.
Experts say:  3 hugs a day- to survive,  6 – in order to live happy  and 9-in order to make progress!
I am inviting you to try an exercise today. Select a close friend or a relative that you’ll meet during day, and right after saying „hello“, simply give him (or her ) a hug! While you are doing it, remember how does it feel and notice how the person, you’ve hugged, is feeling? I’m sure it will be fantastic experience! 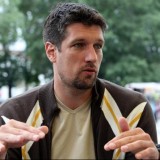